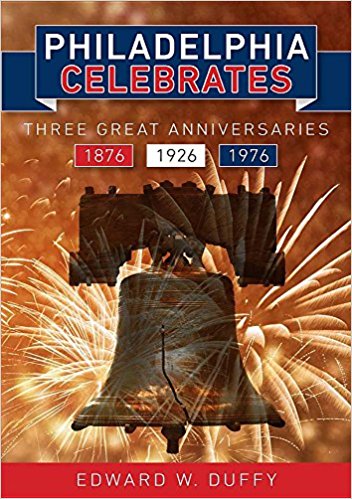 The book will be available at the talk and can be found on Amazon. It is described as follows:

How do you celebrate a national commitment to equality, liberty, and tolerance in the middle of political upheaval, riots, and a national draft? What can we learn about the character of a city by studying how its representatives plan such a celebration?

These are the questions that drive Edward Duffy’ s book, Philadelphia Celebrates: Three Great Anniversaries 1876, 1926, 1976. A remarkable account of the Centennial, Sesquicentennial, and Bicentennial celebrations of the American Declaration of Independence, Philadelphia Celebrates lays bare the motivations behind the planning and execution of these celebrations. Far more than just a history, this book is, above all, a portrait of the people who made these celebrations possible: the rebels, the crooks, the advocates, and the citizens forgotten in the shadow of politicians egos.