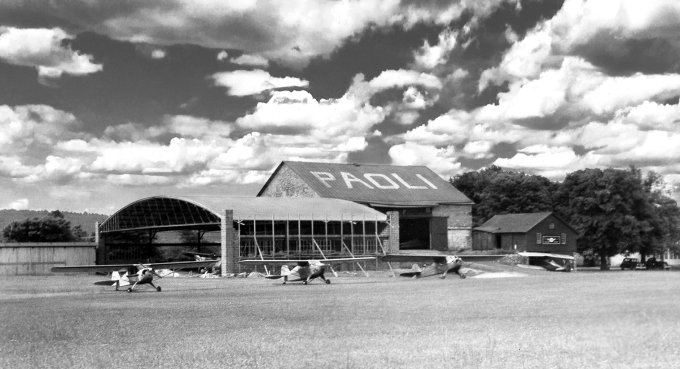 An Illustrated Lecture by

The Great Valley of Chester County, PA, once an agricultural breadbasket dating back to Colonial times, is today shared by up-scale residential housing and one of America’s leading high-technology corridors. But few realize that for a half century, within what is now East Whiteland Township’s Great Valley Corporate Center, stood a legendary airfield that contributed to the history of both fixed-wing and rotary-wing aviation—both nationally and internationally.

The field, officially the Main Line Airport and called by some the Paoli Airport, was one of Pennsylvania’s earliest country aviation centers, and operated from the 1920’s into the 1970’s. During the 1930’s, research advancements in rotary-wing stability and control were developed on this property that would be later incorporated into the world’s first successful helicopter. The field served for decades as a flight training center for hundreds of fixed-wing pilots in both war and peace. In the uncertain early days of World War II, a Civil Air Patrol squadron was established at the Main Line Airport to provide desperately needed manpower and material to support the battle against marauding German submarines along America’s mid-Atlantic coast. And during the 1950’s-60’s, advanced rotary-wing innovations created at the airport contributed to the helicopter as we know it today. The importance of the Main Line Airport cannot be overstated, yet today virtually no trace remains.

Roger D. Thorne began researching the Main Line Airport in 2002. His in-depth knowledge of this place, its planes and its people, will open the eyes of even those who feel they well know the rich history of Philadelphia’s Upper Main Line.

PLACE: Desmond Hotel, One Liberty Blvd., Malvern. located just off Rt. 202 at Rt. 29. Parking is free in the hotel lot.

RAIL SERVICE PICK-UP: We can offer to pick up anyone who wishes to ride SEPTA Regional Rail R-5 service to Malvern from train #9553, due in Malvern at 5:33. We will get them back to the station for the return journey. The hotel also offers a shuttle to/from the station if they catch an earlier or later train. Hotel phone number is 610-296-9800.